Summit Park, a Charlotte-based private investment firm, is pleased to announce the sale of its portfolio company Arkive to Access CIG. Terms of the transaction were not disclosed.

Headquartered in Atlanta, Georgia, Arkive was formed upon Summit Park’s acquisition of certain assets in the United States and Canada from Iron Mountain Inc. The company is a leading provider of records management solutions to a highly diverse base of customers in Seattle and Atlanta in the United States and in Montreal, Ottawa, Calgary, Vancouver, Edmonton and Toronto in Canada. 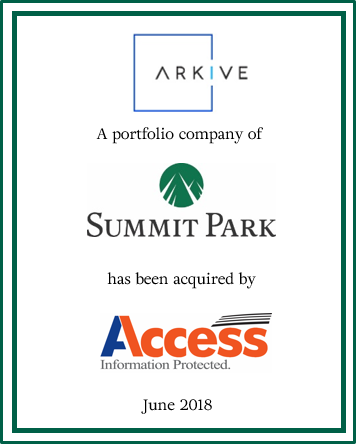 In partnership with the Arkive management team, Justin Ririe, Ben Nicholson, and Dave Gonce, Summit Park successfully executed the carve-out from Iron Mountain, establishing the company as a stand-alone business. In addition, the company completed two add-on acquisitions and started three new service lines, including tape storage, scanning and imaging, and shredding. Matt Magan, a Principal at Summit Park, commented, “The Arkive team did a fantastic job standing up this business following the purchase from Iron Mountain and built significant value in the 17 months of our ownership. We have enjoyed our partnership with them and look forward to the company’s continued success under Access’ ownership.”

This website uses cookies to provide you with the best experience. By clicking the “Agree” button, you are consenting to receive and store cookies from our site.